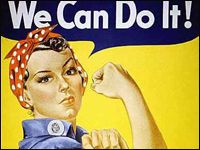 A recent Newsweek cover featuring a photograph of Michele Bachmann with the headline “The Queen of Rage” has created quite a stir. Critics of the Newsweek cover say the image portrays Bachmann as a woman out of control.  Then there was the news story about Bachmann’s migraines and another  declaring a “catfight”  between Bachmann and Sarah Palin.   It got us thinking again about how the media  covers women politicians and whether or not we judge female candidates differently than their male counterparts.  In this hour of Radio Times we talk about women in politics — how we talk about them and what we expect from them.  Our guests are politicial scientists Lara Brown of Villanova University and Debbie Walsh of the Center for American Women in Politics at Rutgers.