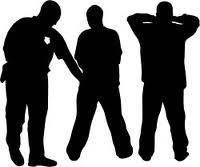 Earlier this month, The American Civil Liberties Union of Pennsylvania filed a lawsuit on behalf of eight men who they say were subject to illegal searches since the City of Philadelphia implemented its stop and frisk policy.  We’ll talk with Temple Criminal Justice Professor JERRY RATCLIFFE who says the program is working and civil rights lawyer DAVID RUDOVSKY who was involved in filing the ACLU suit.

Marion, a nine-year veteran of the department, was previously charged with assault in connection with a 2015 incident outside a Dunkin’ Donuts parking lot.

Plus, less than a quarter of all firefighters submitted proof of vaccination. Officials again declined to impose a tougher mandate on municipal workers.

Tiny wrists in cuffs: How police use force against children

The debate over disproportionate use of force by police that followed George Floyd’s death has largely ignored some of the most vulnerable targets: children.