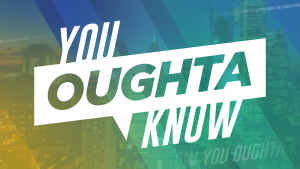 Regular conversations between parents and their kids are key for a child’s development. Knowing that, two local professors have teamed up with people around the world to increase conversation, particularly in low-income neighborhoods. They’re using everyday places like the laundromat, the grocery store, even bus stops, as a way to get the gab going. Today, Shirley visits the Urban Thinkscape in Belmont.

Did you know that in the late 17th century, hemp was one of the most popular crops coming out of Pennsylvania? As a versatile plant, hemp was used for clothing, paper, and even shelter. Regina visits Coexist farm and learns how hemp is making a big comeback after an 80 year ban.

Two weeks into the New Year and your resolution to run more has caused some aches and pains. Running coach John Goldthorp can help and says he can Fix Your Run.

Another important, but often overlooked, element in building strength and energy for a successful workout is your diet. Registered dietician, Nicole Schillinger Vogler suggests complex carbohydrates like oats before a run, and beets to combat post-workout muscle soreness.

Billy Penn’s Layla Jones joins us from the WHYY Newsroom with a list of events for the MLK Day of Service:

Brought to you by You Oughta Know

You Oughta Know is your guide to what’s happening in the Philadelphia region.