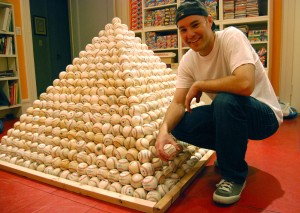 Our guest ZACK HAMPLE catches Major League baseballs. Not just an errant foul or fly ball at a game – he’s worked at this art for a long time and has created a career for himself. Hample’s expertise in working the balls in 48 Major League stadiums produced his 1999 book, “How to Snag Major League Baseballs,” and 2007’s “Watching Baseball Smarter.” He runs a business out of New York City taking people to games and guiding them in catching balls. His baseball collection is now past 5,300. Hample joins us to discuss his new book that includes the evolution of the actual baseball, historic fan stunts, and dispelled foul ball lore called “The Baseball: Stunts, Scandals, and Secrets Beneath the Stitches.”

Ben Simmons back at practice with Sixers teammates

The saga with Simmons started after the Sixers playoff run and series loss to the Atlanta Hawks.

The Philadelphia Eagles have sent 30-year-old Ertz, a three-time Pro Bowler, to the undefeated Cardinals for rookie cornerback Tay Gowan and a 2022 fifth-round pick.

As she winds down her playing career, soccer star Carli Loyd was the honoree of the biggest party ever in her hometown of Delran, New Jersey.