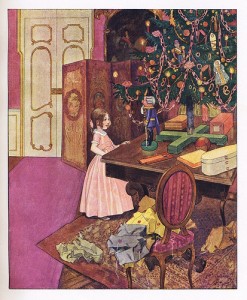 A ribbon-adorned young girl in toe-shoes, the Sugar Plum Fairy, ballerina snow flakes flurrying about on stage in costume. Those snowflakes elegantly taking off their costumes down to pasties and thongs…and keep dancing, but with different poses than those seen in traditional ballet– this is not your grandmother’s Nutcracker! Cabaret Red Light’s Nutcracker draws on an 1816 short story by German writer E.T.A. Hoffmann called “The Nutcracker and the Mouse King,” one of his many “fairy tales for adults.” We’ll discuss this new production with Philadelphia literature professor PETER GAFFNEY who adapted Hoffmann’s classic story with a different view than the 19th century Alexandre Dumas’ version, paired with the memorable Pyotr Tchaikovsky music most Americans have grown up on. Gaffney has co-written a new score using some of Hoffmann’s original compositions, and sings and narrates the show as Drosselmeyer, the Nutcracker’s godfather, accompanied by a live band on stage. Original choreography, shadow puppets and kinetic sculptures assist with the narrative. Gaffney’s co-director and co-founder of Cabaret Red Light, costume designer and dancer ANNA FRANGIOSA, AKA “Annie A-Bomb,” will also join us to explain how she’s helping to bring burlesque theater back to Philadelphia.