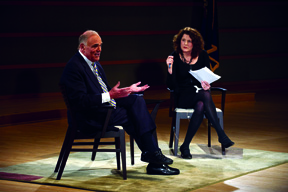 A Conversation with the Governor. We’ll listen back to Marty Moss-Coane’s interview with Pennsylvania GOVERNOR ED RENDELL from January 26th at the Kimmel Center. We’ll hear how the 33 years of public service has informed the former Mayor of Philadelphia in his last year as governor on policy decisions; working in a bi-partisan-challenged climate; and what his plans are for his life after public office. Then we’ll check in with TERRY MADONNA, director of Franklin and Marshall’s College Poll and F&M’s director of politics and public affairs, on an update of the Pennsylvania senate race.
Listen to the mp3

More from WHYY:
Watch the complete interview with Governor Ed Rendell at the Kimmel Center.