On Sept. 26, 1918, the soldiers of the 28th Division, many of them from Philadelphia, nervously glanced at their watches as dawn approached the French forest. The massive artillery fire from their gunners that had started hours before had finally ceased.

H-hour was nearly upon them, and, as the men in the trenches awaited the signal to “go over the top”  into the lifeless stretch between entrenched enemies, the paradoxes of war found many shaken with fear, yet steadied by courage. 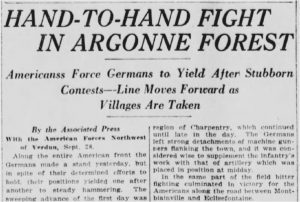 For 28th Division Lt. Daniel Lafferty of the 109th Infantry Regiment and Sgt. Bernard Breen of the 108th Machine Gun Battalion, both alumni of Philadelphia’s Roman Catholic High School, the moment was all too familiar as they had already experienced heavy fighting during the summer. Lafferty had been slightly wounded just a few weeks before, but he was already back with his regiment.

It’s likely that they were thinking of the men who would soon follow them into battle. Lafferty and Breen were well-respected Army veterans, admired for their leadership. Lafferty had received his commission a few months prior to the battle, while Breen had just been recommended for his commission. They knew that the success of the attack — and the lives of their men — would depend in part on how well they led.

A rolling fog crept through the Argonne forest as the officers instructed their men to prepare. Helmet straps were tightened. Field packs, gas masks, rifles, and ammunition were checked. Fighting was expected to be at close quarters, and a final order was barked to the infantry: “Fix bayonets!”

The beginning of the end

One hundred years ago, at 5:30 a.m. on Sept. 26, 1918, following a six-hour Allied artillery barrage from more than 2,700 guns, the largest and deadliest battle ever fought by American soldiers began: The great Meuse-Argonne Offensive. The primary objective was to capture the Sedan-Mezieres railroad hub, Germany’s main supply and communication link, located between the River Meuse and the Argonne Forest.

The Allies believed that capturing this crucial railway hub would result in a German withdrawal from France and force the Kaiser’s forces to capitulate. No one thought it would be easy. Opposing the attacking Allied soldiers along this front just north of Verdun were 40 German Army divisions.

The bitterly fought battle stretched out over 47 days, ultimately bringing about the end of the Great War. More than a million American soldiers fought and by the time it was over, 26,277 of them were dead and another 95,786 were wounded – the highest number of casualties for any battle ever fought by U.S. soldiers.

Newspaper accounts of the great battle captivated an American public anxious for news from the front lines. Worried families of the soldiers agonized as they read these dispatches which not only provided horrific descriptions of the battle, but names of the fallen.

Perhaps the most sobering revelation of my now seven-year search for the alumni of Roman Catholic High School who gave their lives in World War I has been the terrible suffering that was endured by Philadelphians — the soldiers and their families — during the Battle of the Meuse-Argonne.

Newspapers of the time — the Philadelphia Inquirer, the Philadelphia Public Ledger, and the Catholic Standard and Times – have been my most valuable resource in this search. While poring over these newspapers from 1918,  I noticed a gradual, yet significant, change beginning with the early days of the Meuse-Argonne Offensive. The number of names on the daily published casualty lists , as well as the number of ominous stories from the front lines, slowly began to increase.

In the Public Ledger, pictures of the wounded and the dead, accompanied by their abbreviated biographies, sometimes covered a full page. The grim casualty lists which had previously been a half column in length, gradually expanded to three columns. 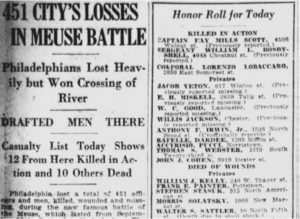 There were also numerous heartbreaking stories of parents receiving news that two of their sons had been killed, or that a previous notification of a son’s death had been in error. There were stories of parents receiving a letter from a son after they’d been notified that he had been killed in battle. My two sons are the same age as the soldiers I was reading about. Many times, I had to stop reading the articles to gather myself.

My search for the names of the 32 Roman alumni who died in World War I has found that many lost their lives during the Meuse–Argonne offensive. On Nov. 1, 1918 the Philadelphia Public Ledger reported that Bernard Breen had been “killed in action during the fighting along the Meuse.” The article noted that his brother, Joseph, was an Army captain, also serving in France.

The Dec. 9, 1918, Philadelphia Inquirer revealed that Daniel Lafferty was “killed in action in the Argonne Forest.” Five days later, the Catholic Standard & Times reported that Lafferty was killed while “bravely leading his men in the early dawn in the advance before Petit Boureuilles, near the Argonne Forest, and edifying his men by his courage …” It went on to say that a letter from a fellow soldier was sent to his widow, Mrs. Esther Lafferty, that “pays a glowing tribute to the deceased as an officer and a man.”

Information traveled slowly back then, and my subsequent research found that, although their families received official notifications of their deaths in late October and early December, both men actually died on Sept. 27, just one day after the start of the great offensive.

Sgt. Bernard Breen and Lt. Daniel Lafferty, alumni of Roman Catholic High School, who both served in the 28th Division and lost their lives on the same day, are buried in France at Meuse-Argonne American Cemetery.

I took some small measure of comfort upon discovering that their graves are located in the same plot, just two rows apart.

Chris Gibbons is a Philadelphia writer. He can be reached at gibbonscg@aol.com

Guests: Mark Zandi, Frank Plantan  All eyes will be on the Korean Peninsula beginning Friday, a ...

Tensions on the Korean Peninsula: a primer

Guests: Frank Plantan  All eyes will be on the Korean Peninsula beginning Friday, as the Olympi ...

‘Blood smells the same,’ but for Vietnam nurses, the war never ends

It’s been more than 40 years since the Vietnam War ended. But for the combat nurses who served there, the de ...