Pennsylvania’s new court-ordered congressional map has thrust the commonwealth into the national spotlight, and the readjusted political calculus in the Philadelphia suburbs is a big reason why.

The redrawn lines there could potentially upend party strongholds, and possibly help tip the balance of power in Congress.

Of the six congressional seats that span the five-county Southeastern Pennsylvania region, three are currently held by Democrats. With the new map, analysts predict the party will pick up at least one more — with the other two more vulnerable for Republicans.

Changes to the state’s congressional map have been in the works since the Pa. Supreme Court declared the previous version an unconstitutional partisan gerrymander in late January. The court gave the GOP-held Legislature a tight timeline to reach consensus on a new version with Gov. Tom Wolf, a Democrat. When that didn’t happen, the court unilaterally produced its own map.

Compared to the 2011 version, which was crafted in a process controlled by Republicans, this map seems to place a higher priority on the idea that a state’s congressional delegation should near proportion with the partisan split of a state’s registered voters.

In the new 6th Congressional District, Democrats are now thought to have a narrow edge over Republicans.

Under the old plan, the district had been contorted to include more rural and conservative parts of the region. In the court-drawn map, the district’s shape is much more compact. It essentially includes all of Chester County, plus a section of neighboring Berks County that includes Reading, a Democratic stronghold.

At a Thursday night candidate forum in Phoenixville, Houlahan made sure the packed house understood that after running through her resume.

Afterwards, the first-time candidate said she’s already encountered voters who are pumped about the district’s new boundaries, including her hairdresser.

“I went in to get my haircut this week, and she threw her arms around me,” said Houlahan.

Costello is not so thrilled. He was already facing what was thought of as a tough re-election campaign.  The new congressional map makes it even tougher, with experts calling the two-term lawmaker one of the two hardest hit incumbents in the state.

Costello, who could not be reached for comment, has accused the Democratic-majority Pennsylvania Supreme Court of being corrupt.

Costello has also said the four justices behind the new map should be impeached.

The images below show the new 6th Congressional District (left) and the prior version, which was considered safer for incumbent Republican Ryan Costello.

Republican U.S. Sen. Pat Toomey gave credence to that sentiment during a press conference Wednesday in Harrisburg, calling the court’s plan a “terrible miscarriage of justice.”

“What the court has done is truly breathtaking,” said Toomey. “They have grabbed power from the elected legislators. They did it in order to draw a partisan map of their own. They’ve engaged in partisanship while hiding behind a mirage of impartiality.”

Republican leaders in the statehouse are now calling on the U.S. Supreme Court to block the new map before the primary on May 15.

In the meantime, candidates like Molly Sheehan are adjusting to running in newly named, newly drawn districts.

Sheehan, a biochemist, was originally one of the Democrats running to replace retiring Republican Pat Meehan in the infamously shaped 7th Congressional District.

She’s now campaigning in the new, Democratic-friendly 5th Congressional District, which is includes all of Delaware County and a chunk of South Philadelphia, where she lives with her family.

To her, the new district boosts her chances of winning, especially in the Democratic primary.

“We don’t have to choose a candidate that’s soft on policy and big on money. We can choose a grassroots person who speaks for the people and not have to worry about naysayers about losing to a Republican with that strategy. There’s not a lot of grounds for that anymore,” said Sheehan.

Still, South Philadelphia Democrats like Sheehan aren’t necessarily getting a warm welcome from their suburban counterparts.

The images below show the new 5th Congressional District (top) and two districts from the prior map that overlapped the same territory. The 1st is held by Bob Brady (D) and the 7th is held by Pat Meehan (R), both retiring. 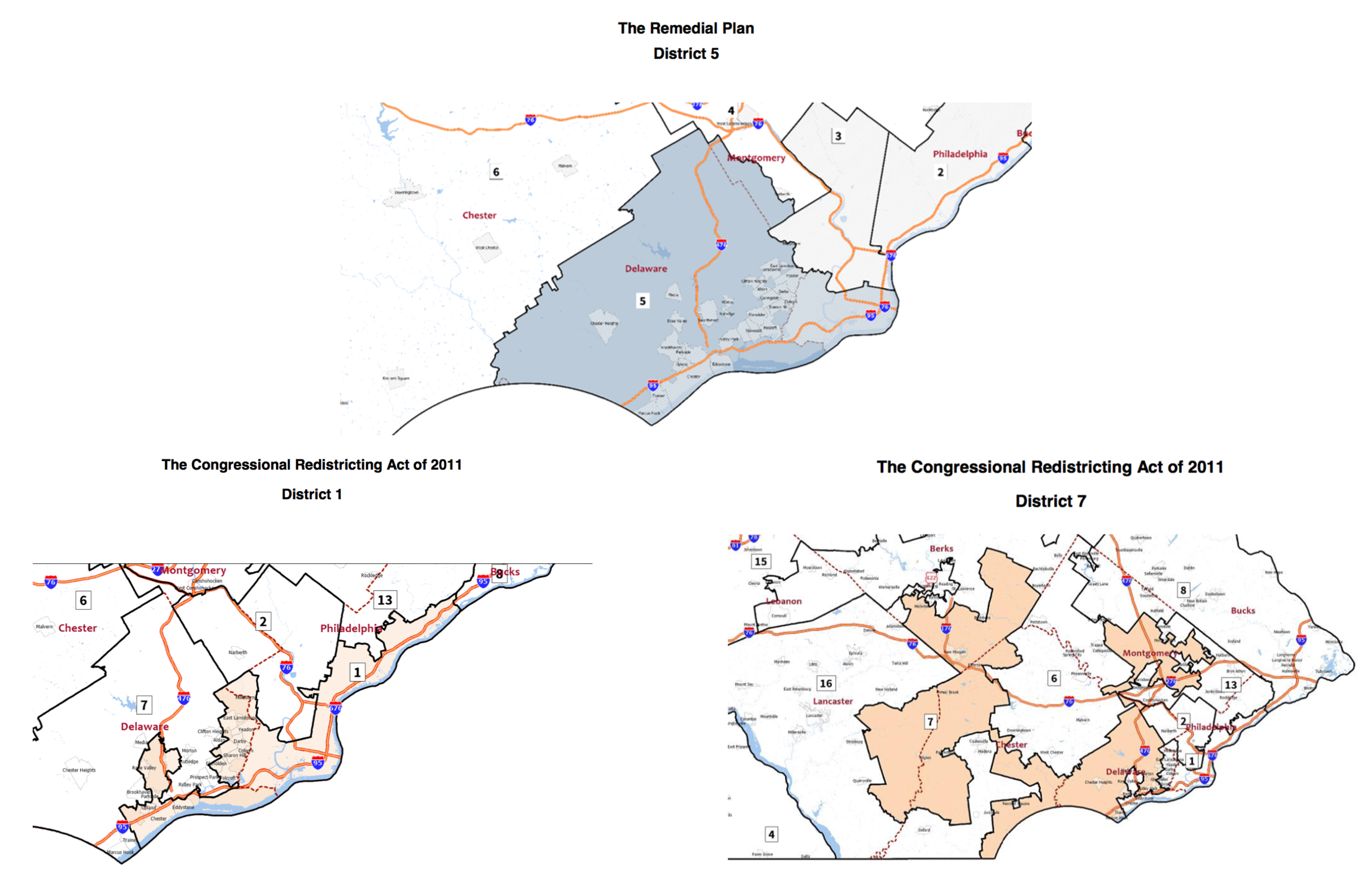 Things are also complicated in much of the rest of Southeastern Pennsylvania.

Montgomery County had been divvied up among five congressional districts, with not one representative living within its borders.

That’s poised to change now that the county is largely coterminous with the new 4th Congressional District, which is expected to favor Democrats. But, at this point, the field is still shaping up.

Rep. Brendan Boyle, who represents much of the county under the current map, has confirmed that he plans to instead run in the new district that includes his Northeast Philadelphia residence.

State Sen. Daylin Leach, who’s based in Montgomery County, suspended his bid for Congress after allegations of inappropriate sexual talk and touching.

The images below show the new 4th Congressional District (left), which largely gives Montgomery County its own seat in Congress. On the right, the 13th is seen as drawn in 2011, one of the county’s five districts.

Taken all together, analysts say the changes in the Philadelphia suburbs — coupled with more Democratic-friendly districts in the Lehigh Valley and the Pittsburgh region — could help Democrats regain control of the House of Representatives.

“If Democrats take back the House, they’ll have a whole lot more oversight over the Trump administration with regards to everything from the Census to immigration,” said David Wasserman, editor of the Cook Political Report, a national non-partisan newsletter.

“It’s possible that President Trump will have to rely much more on his executive powers, rather than working with the legislative branch,” he said.

Officially, however, it’s still unclear who’s running in each district.

While some people are declared candidates, everyone still has to collect nominating petitions from registered voters in order to appear on the ballot. The map saga bumped that process back. Candidates now have from February 27 until March 20 to circulate and file them.

And there’s another wrinkle: Under the old map, Philadelphia had two districts with a majority of non-white residents. Now, there’s a question if that’s still the case. If so, that could be a potential violation of the Voting Rights Act that the NAACP is considering for a challenge in court.

Under both maps, there remains one district comprised by a majority of African Americans. That seat is held by Dwight Evans (D), the only member of Pennsylvania’s current congressional delegation who is not a white male.

Correction: A previous version of this article stated that the new map includes only one majority non-white district. Those figures haven’t yet been confirmed.

The Pa. Supreme Court will now decide the shape of the state’s 18 congressional districts, as Democratic ...

U.S. Supreme Court Justice Samuel Alito has denied the request for a stay on the ruling overturning ...