They drive to Philadelphia from North Carolina once or twice a summer — a mom and her teenage son, together for 20 hours up and back.

They don’t come north for the crack in the Liberty Bell though, or the still-stunning-after-all-these-years National Constitution Center. They don’t even make the road trip to Philly for an authentic cheesesteak from Jim’s on South — although, who’d blame ‘em.

No, the reason this mom and her awesome kid visit Philly each summer is to spend quality time together at the Smith Memorial Playground in Fairmount Park and, more specifically, at the playground’s annual Kidchella family music festival.

A Kidchella concert wit or witout a cheesesteak is completely up to them.

The Smith’s summer festival is a series of all-ages concerts, three in total, each taking place on the 3rd Friday evening of June, July and August, and each featuring two top notch all-ages alternative bands from around the country.

After four successful years in the books, Kidchella is turning into a fantastic reason for locals and out-of-towners alike to visit Philly this summer.

I have proudly booked the bands that play the concert series since its humble beginnings back in the summer of 2014, back when it was just a single standalone event in the middle of Philly’s sweaty season. Since then, Smith Memorial Playground’s Kidchella festival has grown by leaps and bounds and 2018 promises to be the biggest and best season yet. 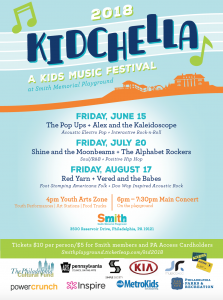 Still featuring the best and brightest of modern family music from all across the country, the events now includes food trucks, pre-show performances from local youth groups, arts & crafts, and so much more. This summer, Kidchella even picked up its first national sponsor when Kia drove on in, having recognized the value in being a part of such a family-focused concert series. A new and different Kia vehicle will be on hand for families to sit in and experience during each concert this summer.

The three summer Friday evenings at the Smith have become destination events that are well worth the drive from nearly anywhere, be it South Jersey or North Carolina! In five short years, Kidchella has become a bona fide tourist attraction and one more incredible reason to visit Philadelphia.

While there are certainly out-of-town families on the lawn, most of the 800-1000 ‘regulars’ who carry their blankets and picnic baskets through the gates of the glorious, century-old Smith Playground for Kidchella don’t have nearly as far a commute as that awesome mom and son from North Carolina.

Philadelphians are lucky to have Grammy nominated, national-touring, all-ages bands who are in heavy rotation on the popular Sirius XM Kids Place Live channel come to town to take the stage. It all happens among the century old park’s wooden slide and swing sets and in the cool shadows dotting the back lawn of the Smith Playground, three times every single summer.

Here’s how the summer of 2018 will shake out at The Smith: On June 15th, see the two time Grammy nominated Brooklyn duo The Pop Ups with local faves Alex & the Kaleidoscope. On July 20th, Kidchella welcomes back the extremely popular masters of soul and R&B Shine and the Moonbeams for their triumphant 3rd visit as well as the Grammy nominated hip hop trio Alphabet Rockers for their second Kidchella performance. Finally, on August 17th go into ‘The Deep Woods’ with Portland, Oregon’s own Red Yarn who will perform along with New York City’s Vered and the Babes. Get your Kidchella tickets here.

Brought to you by Philly Parenting

Parenting children – when they become adults

Parenting changes once kids reach adulthood, but it's hard to figure out what a parent's role should be. Today, raising resilient adults and the risks of overparenting.

From the Radio Times archive, we revisit Marty Moss-Coane's interview with Japanese Breakfast's Michelle Zauner on her musical talent and memoir, Crying in H Mart.

South Street will be packed with outdoor dining, retail, and entertainment.