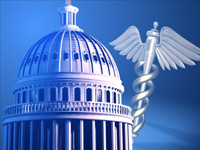 Hour 2
Over the weekend, Democrats led by House Speaker Nancy Pelosi narrowly passed a health care reform bill that included the controversial “public option.” But it also included an amendment, the Stupak amendment that would restrict federal funding for abortion services, even in private health insurance plans. The provision, and the bitter debate on the House floor about it, has brought the abortion debate back to the top of the newscasts. Joining us in the first part of the show will be the Guttmacher Institute’s Adam Sonnfield, who will explain how abortion funding works now and what the Stupak amendment would do. Then, we’ll speak with Peter Beinart, senior political writer for The Daily Beast, and Michelle Goldberg, senior correspondent for The American Prospect, whose recent articles offer differing takes on the compromise that let the House pass a health care bill.
Listen to the mp3