The nation is at a pivotal moment in the fight against the pandemic. Vaccines are finally starting to roll out, but the virus is spreading faster than ever — and killing thousands of Americans daily. And it will be months before enough people get inoculated to stop it.

That means it’s critical to continue the measures that can limit the toll: mask-wearing, hunkering down, hand-washing and testing and contact tracing.

“Vaccines will not obviate the need for testing any time soon,” says Dr. Ashish Jha, the dean of the Brown School of Public Health. “It doesn’t mean we can let our guard down. The virus will not be gone.”

So where do things stand with testing in the U.S.? 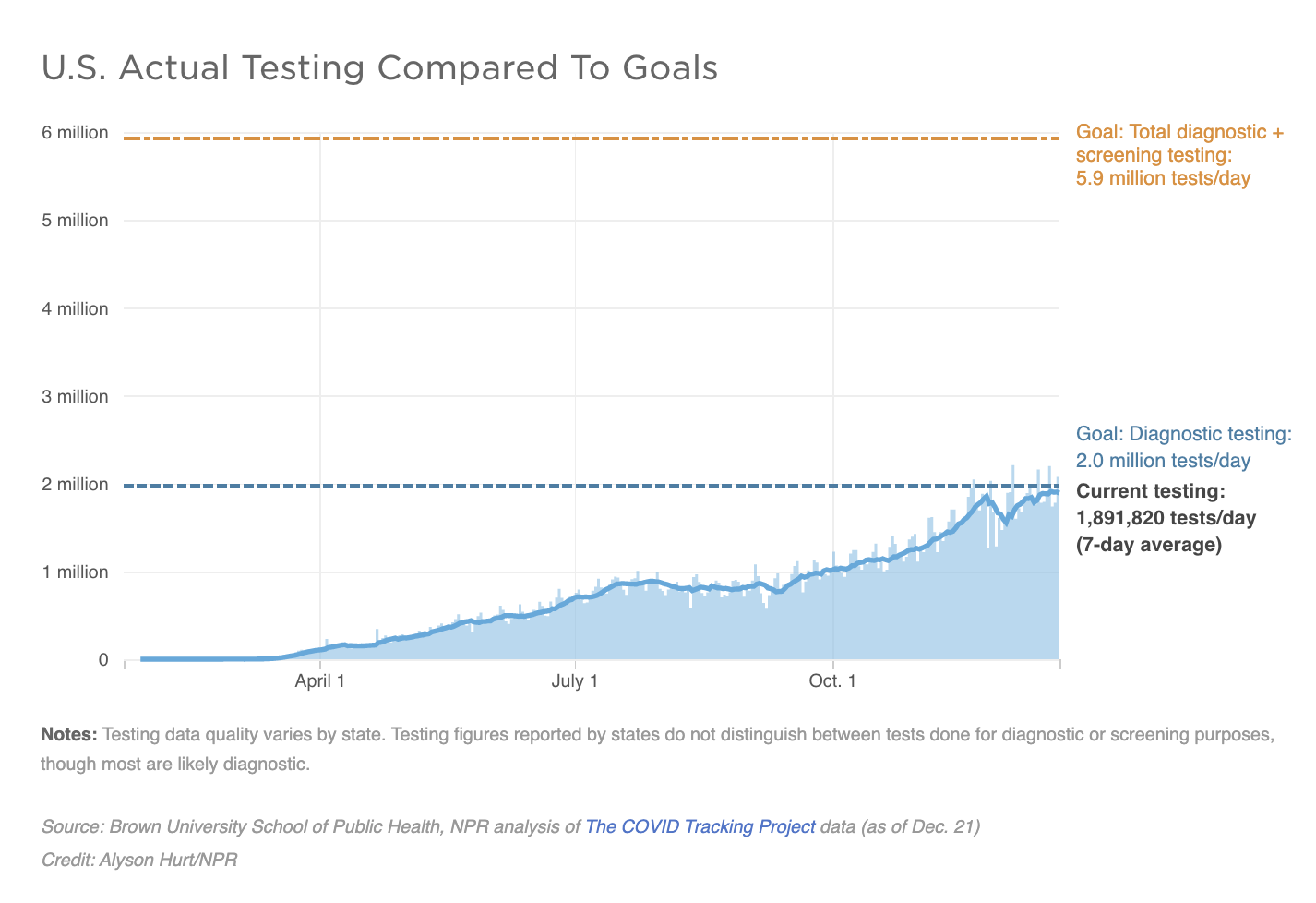 A new analysis that researchers at Brown and Harvard universities conducted for NPR finds that the country may finally be close to doing enough testing to identify most people reporting symptoms and at least two of their close contacts.

The amount needed for that is 2 million a day by January 1, 2021. The U.S. is currently conducting nearly 1.9 million tests daily.

Testing simply those who are sick and two of their contacts is a bare minimum to respond to current outbreaks, Jha explains.

The analysis finds that the U.S. should be doing about three times more than that — or nearly 6 million daily tests — to stop outbreaks from growing and protect the most vulnerable. This approach would proactively screen key groups of asymptomatic people including college students and school teachers for example.

“There’s no doubt that we’ve made progress,” says Jha. “But testing in this country is still really inadequate.”

Even that progress is spotty around the country. Only 12 states plus Washington D.C. are conducting enough testing to reach the bulk of symptomatic people, according to the analysis. Those states are: Alaska, California, Connecticut, Illinois, Maine, Michigan, Montana, New Jersey, New Mexico, New York, Oregon and Vermont.

Another nine are very close, and the remaining 29 states fall short.

“A lot of states have invested a lot of resources into trying to do more testing and we’re seeing payoffs and we’re seeing some states are able to do that basic level of testing,” Jha says. “That is progress.”

But even 2 million tests a day is really far from what’s needed to actually slow raging outbreaks and prevent them from springing back up again, Jha explains. 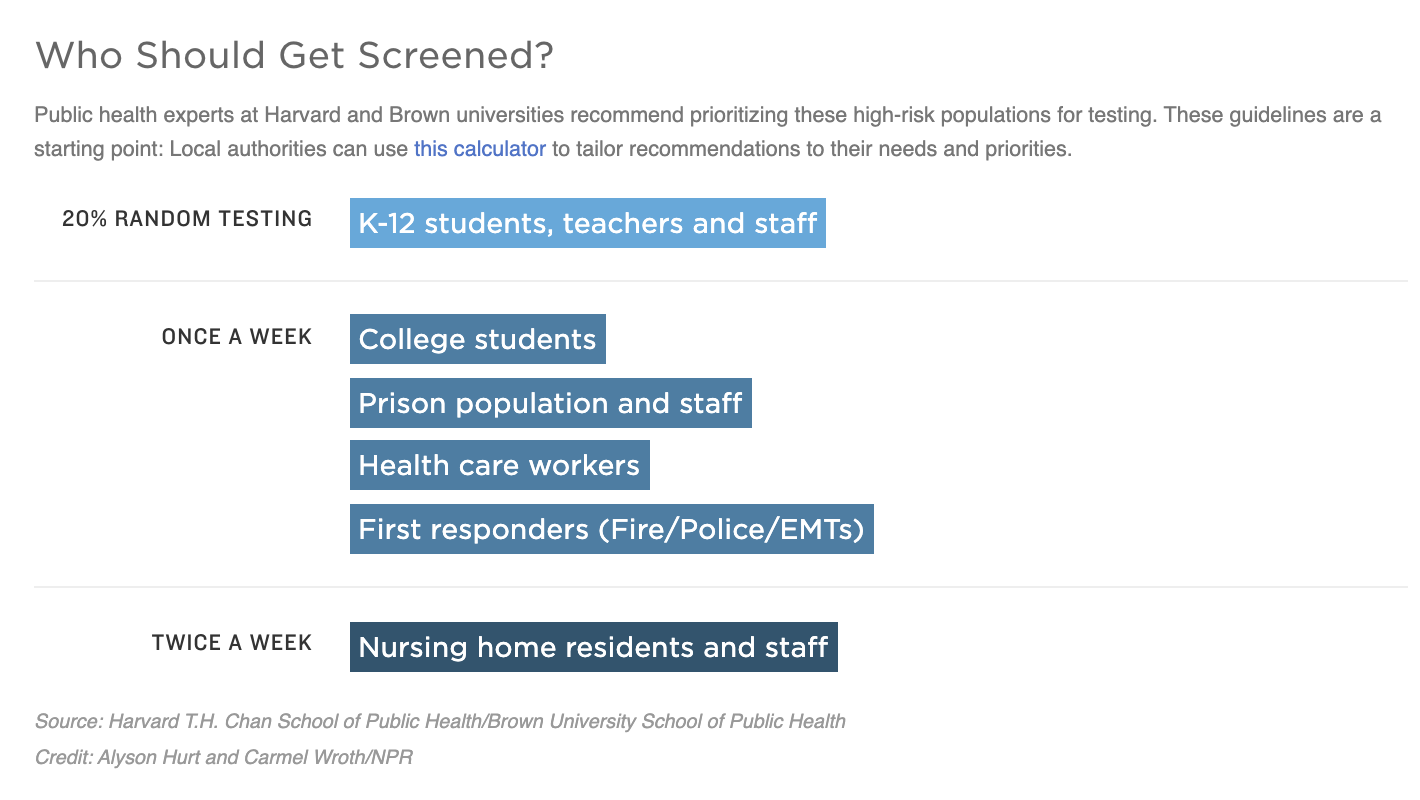 The minimum targets for testing symptomatic people are based on modeling growth of current outbreaks. It assumes a modest two contacts per infection get tested, because of the difficulties many states report conducting contact tracing. Since as many as one out of two infections are spread by people without symptoms, more ambitious testing efforts are needed for communities to screen high-risk, asymptomatic people.

“Just focusing on testing people who have symptoms or their close contacts is really not enough. That has been the Achilles heel of our entire disease outbreak control,” Jha says. “We’ve never really had a strategy for identifying people with asymptomatic infection.”

To capture those cases, Jha and his collaborators propose that communities should be testing, at a minimum: 20% of students and teachers in K-12 schools weekly; college and university students, prisoners and guards, health care workers and first responders weekly; and nursing home residents and staff twice weekly.

“What we need is a jump-start of our testing if we want to actually move to an offensive strategy around active screening of our asymptomatic individuals,” says Dr. Thomas Tsai, an assistant professor in the Department of Health Policy and Management at the Harvard T.H. Chan School of Public Health, who helped conduct the testing analysis.

“It would mean that students can return to school safely. Nursing home residents and family members know that their loved ones in nursing homes and the people who work [there] can do so safely,” he says. 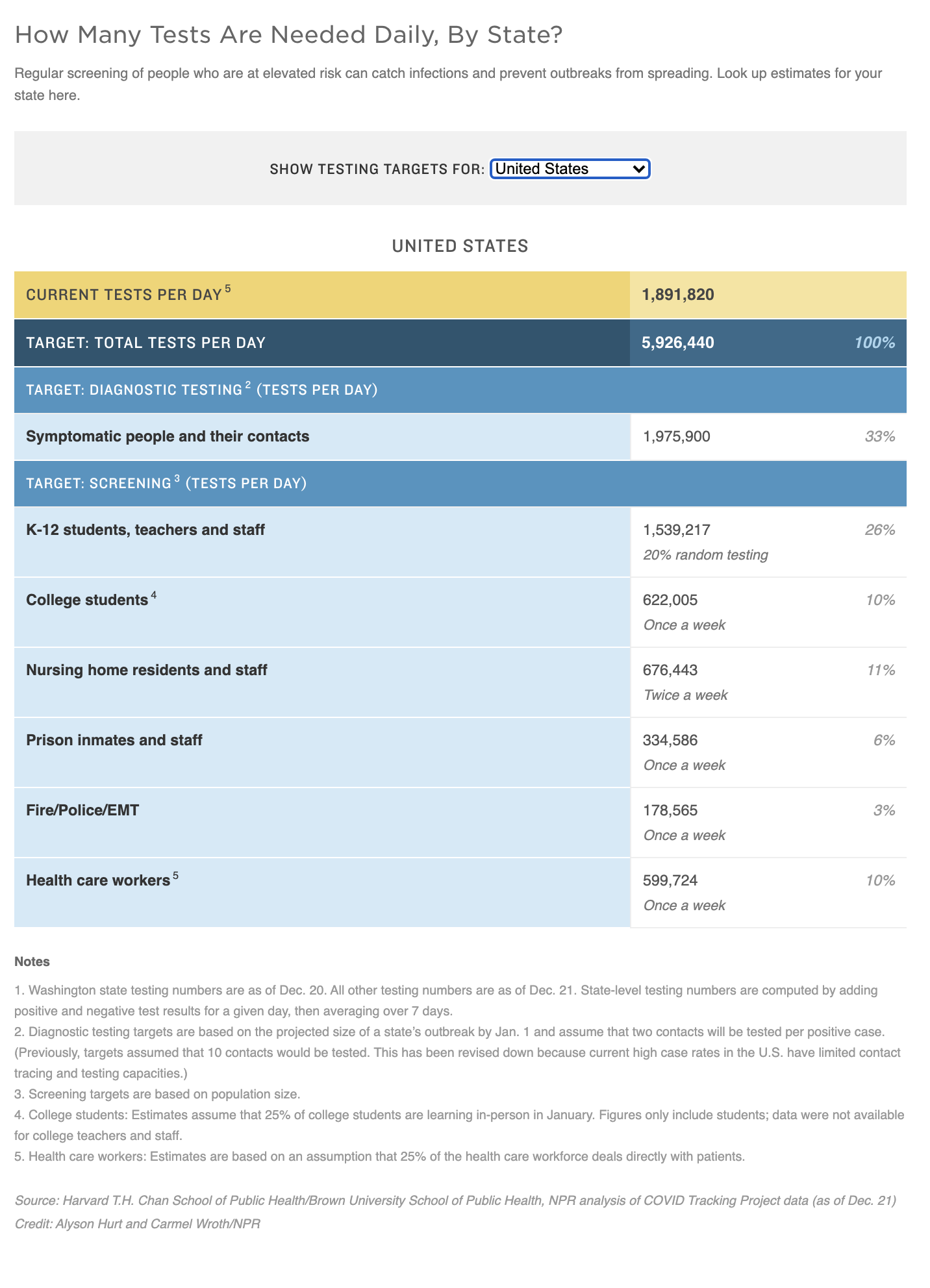 In spite of the optimistic vaccine news, Tsai says this type of coordinated and proactive coronavirus screening is still critical to stopping the pandemic in the U.S. It will “buy time for the vaccine to be rolled out,” he says.

“Testing is just as important as before vaccines,” Tsai says. “The vaccine isn’t an either/or strategy. Vaccines are part of the tool kit along with continued testing and masking and social distancing. In fact it’s even more important now that all of these strategies are working together to suppress the virus.”

The researchers hope the incoming Biden administration will provide the federal leadership needed for a more coordinated national response to provide more testing. The proposed 6 million tests a day would probably require $10 to $20 billion dollars for at least three months, the group estimates.

“It will take a real effort from the federal government, but it’s not going to break the bank,” Jha says.

Some other researchers say the estimate that about 2 million tests are needed as a bare minimum today may be an underestimate.

Jennifer Nuzzo, a senior scholar at the Johns Hopkins Bloomberg School of Public Health Center for Health Security, notes that the percentage of people testing positive has been increasing, suggesting that far too few people are being tested, to capture the actual infections in the community.

“We probably need to at least double the amount of testing we’re doing,” Nuzzo says.

Unfortunately, the increase in testing appears to have stagnated, Nuzzo notes.

“The rate at which we have increased testing in the last month is much slower compared to the previous month and yet we have more infections now than we’ve ever had,” Nuzzo says.

Jha, Tsai and others hope the increasing availability of antigen tests could quickly increase the nation’s testing capabilities and hope the targets in the new analysis will spur policymakers to make that happen.

Nuzzo hopes so too.

“Testing is slowing in the United States. We’re hearing reports of shortages once again and test turnaround time increasing. All of the warning signs are there that now is the time to take this problem seriously and fix this problem for good,” Nuzzo says.

Nursing homes leaders are redoubling efforts to get staff and residents boosted with the new version of the COVID-19 vaccine.

The hope is that the modified boosters will blunt yet another winter surge.

The nation’s infants, toddlers and preschoolers are finally getting their chance at COVID-19 vaccination as the U.S. rolls out shots for tots this week.