Women are seeing the fabric of their lives unravel during the pandemic. Nowhere is that more visible than on the job.

The coronavirus pandemic is wreaking havoc on households, and women are bearing the brunt of it. Not only have they lost the most jobs from the beginning of the pandemic, but they are exhausted from the demands of child care and housework — and many are now seeing no path ahead but to quit working.

Women have made great strides over the years: More women than men are enrolled in college, in medical schools and law schools.

The number of women in the workforce even overtook men for a brief period of three months through February this year.

But the uncomfortable truth is that in their homes, women are still fitting into stereotypical roles of doing the bulk of cooking, cleaning and parenting. It’s another form of systemic inequality within a 21st century home that the pandemic is laying bare. 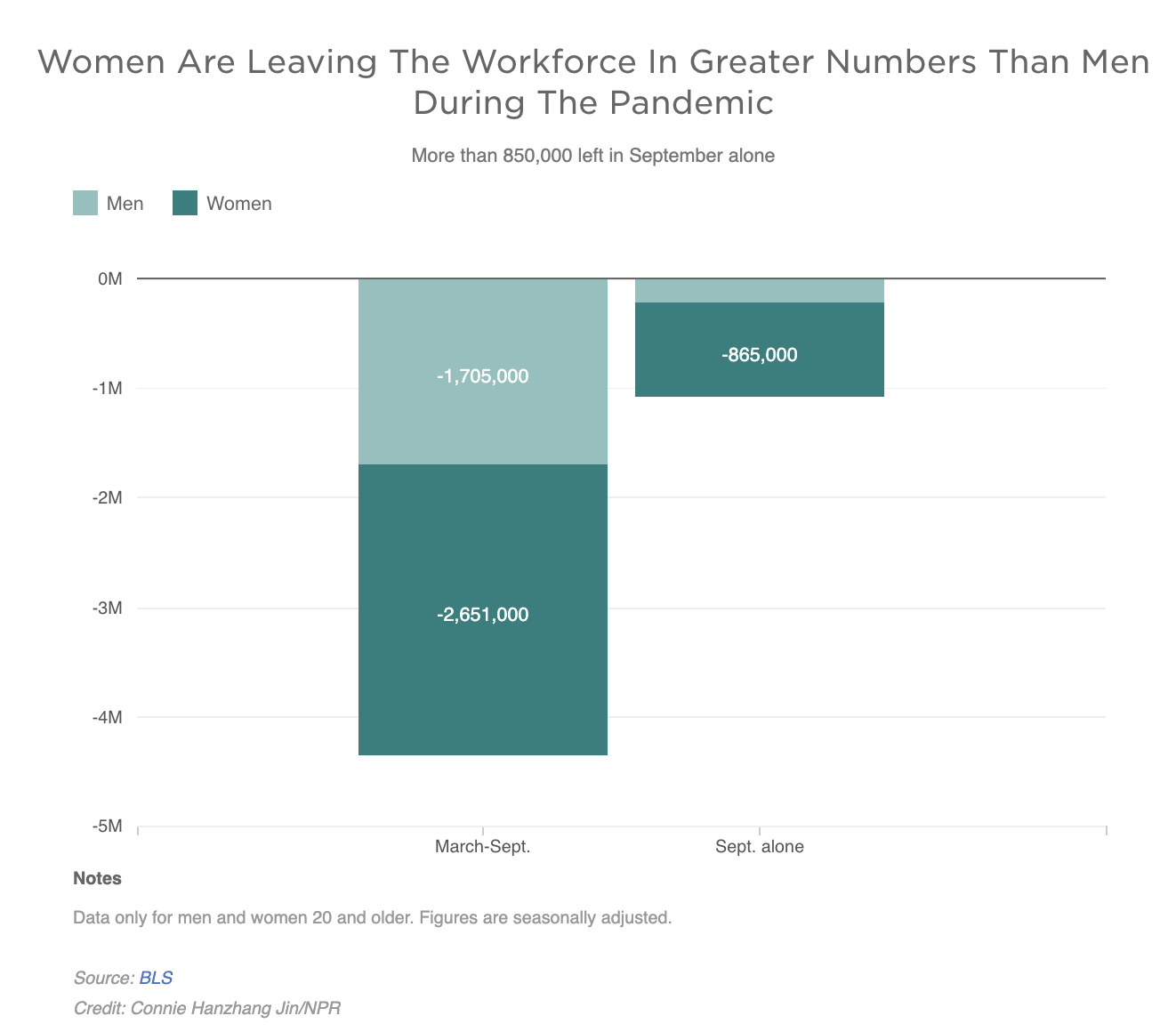 Already, their parents are getting sick and dying. Their kids are falling behind. So along with doing everything else, working becomes impossible.

The pandemic’s female exodus has decidedly turned back the clock by at least a generation, with the share of women in the workforce down to levels not seen since 1988.

A growing, prosperous economy depends on a large and committed workforce, with women playing a vital role. If women decide to stay on the sidelines, the very dynamism of the United States economy is at risk, as many households lose half of their earnings and productive capacity. This trend could even turn back the clock on gender equity, with harmful consequences to society and the economy.

“If not soon reversed, the decline in the participation rate for prime‑age women could have longer-term implications for household incomes and potential growth,” Federal Reserve Gov. Lael Brainard said in a speech last week. Brainard says if women continue to remain out of employment, it risks “harming not only the prospects of these individuals, but also the economy’s potential growth rate.”

‘Mom penalty’ vs. the ‘dad premium’

The gender pay gap is playing a big role — women make 82 cents for every dollar a man earns. So when couples have to take an economic decision, because women typically earn less, they are the ones who take the step back. 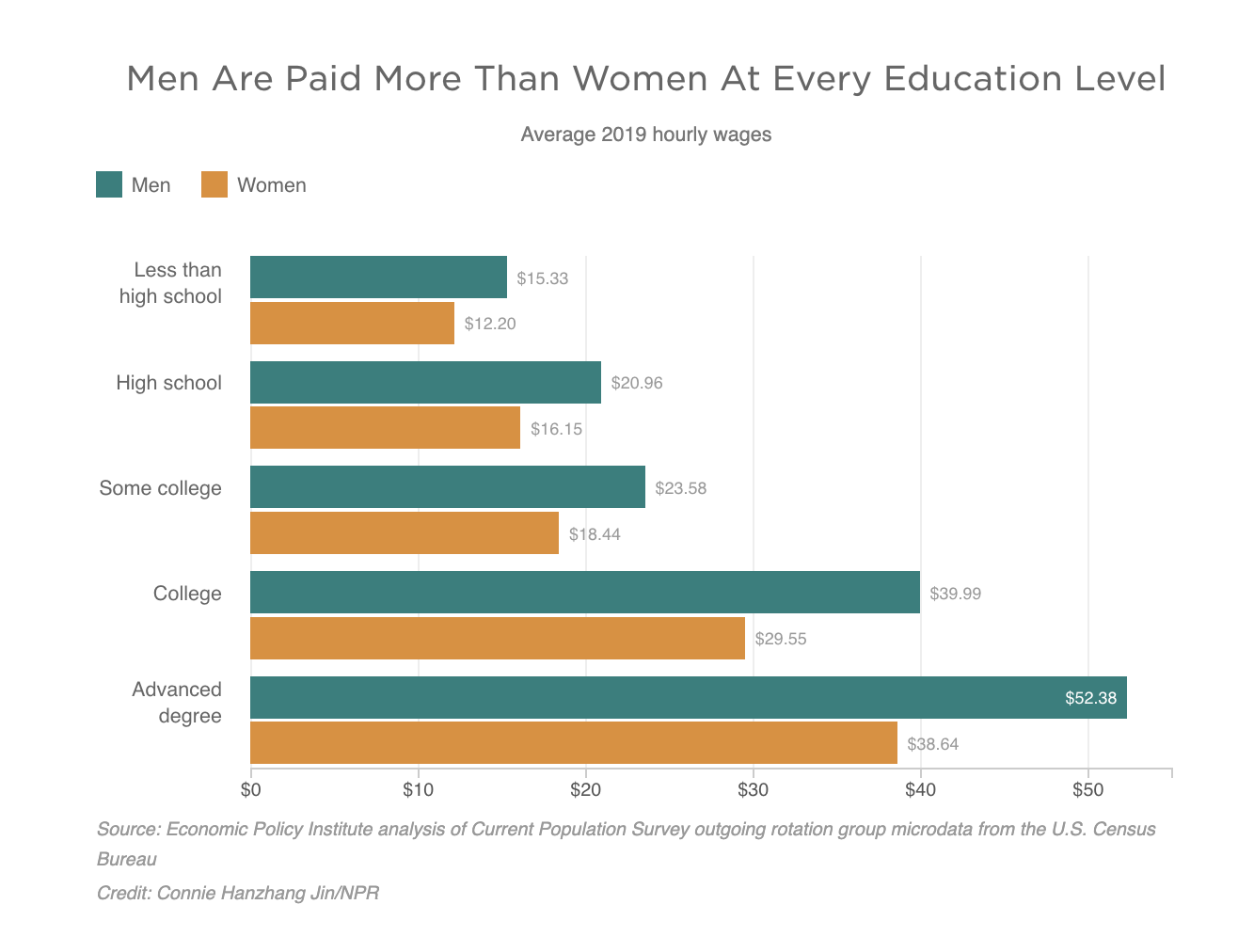 This “mom penalty” is even higher for women who are better educated and have higher incomes. In fact, among this group, this step back comes with a “dad premium.” Driven by the biological clock, women take time off or cut back on their hours just as their careers are taking off, giving men the opportunity to carry on with their work, move up and earn more.

Buildup of rage in recent years

The pandemic has certainly poked the bear. And the large numbers of women leaving the workforce seems like a collective cry of anguish, and an anger that is spilling out into local Facebook groups, Twitter feeds, blog posts, and even obituaries.

Part of this stems from recent history, when many women simmered with rage in the wake of the #MeToo movement, leading to an outpouring of stories of humiliation or being molested by men. And soon after, millions of women marched the streets after the last presidential election, seethed during the confirmation of Supreme Court Justice Brett Kavanaugh, and finally grieved the death of Justice Ruth Bader Ginsberg, who spent a lifetime fighting for women’s rights.

And now again, there’s a sense of hopelessness and loss of control, which contributes to the stress and exasperation that is on full display on social media.

“I am tired. And I am angry. Livid in fact. Filled with rage,” Selena Laurence writes in a Medium post. Laurence, mother to a teenage son and a college-going daughter, writes about being worried about the challenges of protecting them. She recounts how she gets her entire family tested for COVID-19 when she goes to visit her 80-year-old father who is in treatment for cancer. They also quarantine, drive eight hours, and then only to interact with her parents outdoors. “It. Is. Exhausting,” she says.

What’s at stake: Future earnings and the glass ceiling

Women are taking it in the chin, up and down the income spectrum. A large portion of job losses during the pandemic has come in businesses like restaurants and hotels, both sectors with high female employment. Many of them are low income, and the impact on their households is devastating.

All this reverses years of gains made by women. In 1948, when the Labor Department started tracking the data, only a third of women held jobs, but that number had nearly doubled by the late 1990s. The ratio of women working has now fallen below 57% for the first time since 1988.

The scars from this time can linger, especially given the consequences for the financial stability of women. An employment gap of just one year leads to a 39% decrease in annual earnings and that increases over time, according to a report from the Institute for Women’s Policy Research. It also reduces women’s chances of breaking the glass ceiling and becoming future leaders in society.

“The problem is that we have a lot of evidence that when you take time out of the labor force, it can be very difficult to get back in,” the economist Gimbel says. “And the other aspect of this is you are not then making progress in your career. You are not getting promoted. You are not building out skills and experience that will cause future employers to pay you more money.”

Violence against trans women of color and housing insecurity are just a few of the issues that organizers hoped to highlight at this year’s march.

‘Well, What Were You Wearing’ exhibit illustrates stories of sexual assault survivors

The exhibit at Jefferson works to counter the misconception that a person's wardrobe choices imply consent.