Kecia Jolley is getting a pay raise this week. But she’s still making minimum wage.

Jolley works as a grocery store cashier in Missouri — one of nearly two dozen states that increased their minimum wages on Jan. 1. Economists say those mandatory wage hikes are an important factor boosting pay for workers at the bottom of the income ladder.

“I think that I’ll be better off,” she says. “But I think that it’s going to still be a struggle.”

Jolley says her paycheck will still barely cover rent and utilities. She relies on food stamps and school lunches to help feed her three children — ages 6, 11 and 14. Jolley is grateful that a ballot measure passed by Missouri voters in 2018 calls for three additional increases in the minimum wage over the next three years. By 2023, the minimum will climb to $12 an hour.

“I would consider that at least a decent living wage,” Jolley says. “Then people can pay their bills. They can possibly get a few things on their ‘wants’ list every month. Like, kids need new clothes. Or — I’m a girl. I ran out of mascara, like, a month ago. Luxury items such as new socks.”

While the federal minimum wage hasn’t changed in more than a decade — it’s still $7.25 an hour — many cities and states have adopted higher thresholds. In Arizona, Colorado and Maine the minimum wage is already $12 an hour. Minimums are higher still in California, Massachusetts and Washington state. 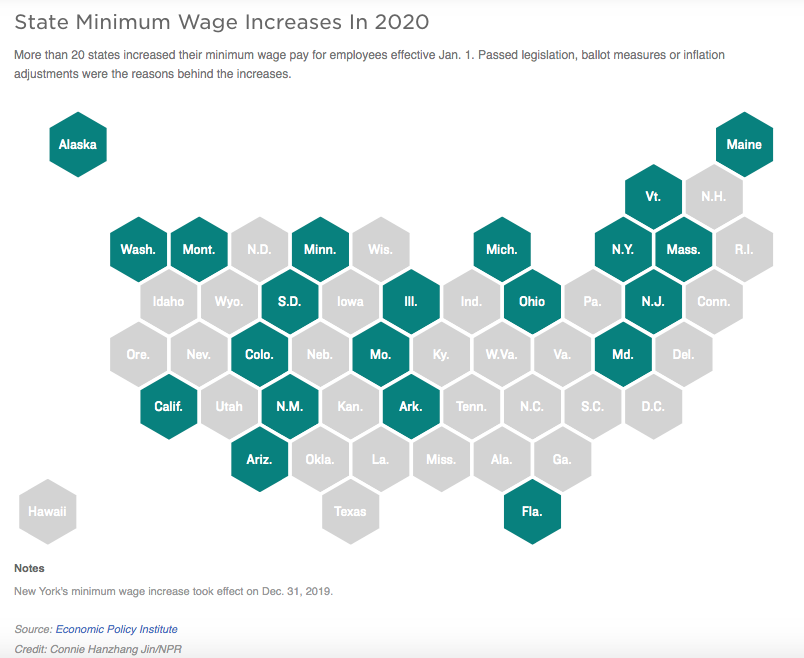 “If you’re a minimum wage worker in America right now, on average, you’re actually probably getting paid closer to $12 an hour,” says economist Ernie Tedeschi of Evercore ISI. “That’s what I call the effective minimum wage.”

Tedeschi says rising minimums at the state and local level are an important driver of wage gains at the bottom of the pay scale.

“Right now, the economy is doing something extraordinary,” he says. “People at the bottom of the distribution have actually seen higher wage growth than people at the top and in the middle.”

Crunching census data, Tedeschi finds workers in the bottom third of the income ladder have enjoyed pay raises of about 4.1% in each of the last two years, compared with 3.6% raises for the top third and 3.9% for all workers.

But without the upward pressure of rising minimum wages, Tedeschi estimates the bottom third would have received raises averaging just 3.3%.

“Minimum wages probably are the difference that are kicking up wage growth at the bottom to higher levels than other groups in America,” he says.

The patchwork of minimum wages across the country creates a sort of natural experiment for economists trying to measure the effects on low-wage workers.

“No matter how you cut it, the low-wage workers are getting a larger wage boost in states that have raised their minimum wage,” says senior economist Elise Gould of the left-leaning Economic Policy Institute.

Gould estimates the higher minimums that took effect this month boosted paychecks for 6.8 million workers across the country.

But others caution that the higher cost for employers may come with trade-offs.

“You’re getting a raise if you keep your job and if your hours don’t change,” says economist David Neumark of the University of California at Irvine. “But there’s plenty of evidence that there is some job loss from minimum wages and those workers are worse off.”

Neumark acknowledges that job loss associated with minimum wage hikes may be less of a problem when unemployment is this low.

“Raising it in a very hot labor market is probably less damaging,” Neumark says. More high school students and others “might be drawn in because wages are rising,” he says. “And if a few of them have job opportunities foreclosed, it might not be so terrible.”

Jolley hasn’t seen any job cuts at the grocery store where she works. The cashier doubts she would be getting a raise were it not required by the higher minimum.

“We still need to keep pushing forward because, hopefully, people like me will be able to actually make it every month,” she says.

Conceived as a short-term program, the 30 Day Fund has proven invaluable to those with limited access to other programs.

More than half a million Pennsylvanians set to lose unemployment benefits

With the long-awaited relief bill sitting on President Trump’s desk, 500,000 Pennsylvanians are set to lose unemployment assistance amid a surging pandemic.