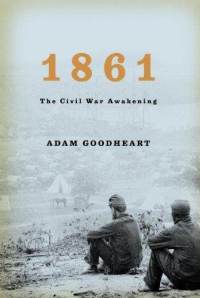 [REBROADCAST] Today we’re looking towards the 148th anniversary of the Battle of Gettysburg starting tomorrow, 7/01. This April we celebrated the 150th anniversary of the Confederate forces shelling Fort Sumter offshore Charleston, South Carolina – the first battle of the U.S. Civil War with historian and journalist ADAM GOODHEART whose recent book, 1861: The Civil War Awakening, chronicles the outbreak of war, as well as an epic tale of courage and heroism beyond the battlefields. Goodheart is the director of Washington College’s C.V. Starr Center for the Study of the American Experience, and all year long, he’s been contributing to The New York Times’ “Disunion” blog exploring events from 150 years ago with a contemporary lens.