The National Dog Show is in Philadelphia Saturday where judges will select a Best in Show for its Thanksgiving Day broadcast. The Philadelphia Marathon Weekend shuts down part of the city. Plus, Ani DiFranco and Tower of Power are in Philly, and Prince reigns again in his signature film “Purple Rain,” with a side of Quizzo.

In the 80s, Prince was in his heyday straddling the music and film worlds. The Philadelphia Film Society pays homage to the late legend’s dominance of the era with “Throwback Quizzo & Movie: Purple Rain.” Assemble your squad and come up with a Quizzo team name that reflects the times. If your Prince trivia is up to par, you’ll win a prize and get to watch him strut his stuff in the film that earned him a legion of fans and an Oscar for Best Original Song Score.

The community-centered film organization highlights some of the best short films from this year’s film festivals including Black Star, the Philadelphia Asian American Film Festival, and the Women’s Film Festival. Among the screenings at “Best of Fests 2022” are “Testimony: 52nd and the Violence of UPenn,” “The Walk Home” and “Wuss.”

Pac and Biggie Are Dead

“Pac and Biggie are Dead” is inspired by the Tom Stoppard play “Rosencrantz and Guildenstern are Dead” which deals with life and mortality by way of “Hamlet.” In this play from Theater in the X, the ultimate fates of Biggie and Tupac are intertwined with moments from hip-hop and Black history as the two rap icons consider their lives and deaths. 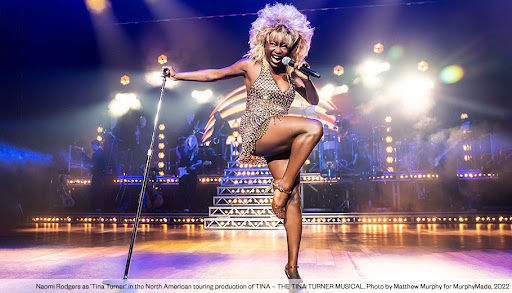 The hit Broadway musical comes to town just in time for the Thanksgiving holiday. The story of Tina Turner’s rise, fall – and rise again is portrayed in “Tina: The Tina Turner Musical.”  The role of Tina is so demanding that two actresses have been tapped to play her on the national tour —Naomi Rodgers and Zurin Villanueva. The show has a strong female presence behind the scenes as well. It was written by Pulitzer Prize-winner Katori Hall, the creator and showrunner of the Starz hit show “P Valley,” and directed by British filmmaker and producer Phyllida Lloyd.

Former first lady Michelle Obama has earned the distinction of being one of the most popular first ladies in history. Her memoir “Becoming” sold 17 million copies and is among the best-selling books of all time. Her second book, “The Light We Carry,” released Tuesday, is a guide to handling tough times. Mrs. Obama will take the stage with Hoda Kotb and Gayle King in her two-night appearance in Philadelphia.

The Philadelphia Kennel Club has been hosting dog shows since 1879, so we figure they know what they’re doing. The National Dog Show features 194 breeds competing to become “Best in Show.” This year includes three new breeds – the mudi, the Russian toy, and the Bracco Italiano. Saturday’s competition will be broadcast on NBC on Thanksgiving Day, while Sunday is more focused on family-friendly activities and exhibitions.

More than 20 food trucks will be onsite at the Philadelphia Street Food Festival. Some of Philly’s most popular purveyors of street eats will be on deck, including pizza, tacos, and fries. At various places in the vast complex there will be eating contests, a cheese fry fountain (!), a kid’s zone, axe throwing, karaoke, and a silent disco, just to name a few. Your general admission ticket comes with a free drink and all food items are $5 or less. VIP tickets come with four drink vouchers and early access two hours before general admission.

If your palate is more refined you might prefer the offerings at the Philly Wine Fest taking place nearby. Billed as an ‘elevated’ wine-tasting event, it’s a chance to try wines from around the region and the world. Craft beers and cocktails will also be available for sampling. The timed event includes live music, food for purchase, a commemorative glass, and credit for slots play. You can also purchase wines and craft beers to take home.

The Pancakes and Booze Arts Show makes its annual stop in Philadelphia this weekend. Now in its 10th year, the global event is held in more than 35 cities around the world to encourage art appreciation and collecting without pretension. As emerging artists display their work, free pancakes are available on demand, live music is played and beer is poured.

The Philadelphia Marathon weekend is not just for elite and long-distance runners. It includes a fitness expo, a kid’s fun run, a half-marathon, and, a 8K run. It’s also one of the most popular spectator events of the year with multiple street closures before, during, and after the race. On Friday, the fitness expo opens at the Pennsylvania Convention Center, featuring health and fitness/running vendors. (You are also encouraged to bring new and gently used shoes to be donated to Ukrainian relief efforts.) Children 5-12 can take part in a kids fun run during pre-race activities beginning at 9 a.m.

World of Song’s: Thanks and Giving Children’s Benefit Concert

Music of Elton John For Kids

On Sunday, Elton John will play his final U.S. concert at Dodger Stadium capping off a five-decade career that made him one of the top-selling male solo artists of all time. The concert will be streamed live at 11 p.m. on Sunday night on Disney+. But, if you’re a fan that would like to see your kids appreciate the Rocket Man’s genius, you can take them to Music of Elton John For Kids and expose them to classics like “Bennie and the Jets,” “Candle in the Wind” and “Philadelphia Freedom.”

The annual lighting attraction LumiNature returns to the Philadelphia Zoo with several new installations. One of them is the Penguin Prismatic show featuring a 40-foot-tall penguin with 40,000 lights. There are 200 other illuminated penguins along with flamingos, a 100-foot aquarium tunnel, a Wilderness Express train, and a 22-feet tall Butterfly Tree. Hot drinks for kids and adults are available for purchase. Seasonal fare and wandering performers round out the immersive experience.

Ani DiFranco stands out not just for her music but for paving the way for other musicians. For over two decades, she’s recorded all 20 of her albums as an independent artist exclusively on her own label, Righteous Babe Records. DiFranco is known for her activist work for women’s and LGBTQ+ causes. Her latest release, “Revoluntary Love” delves into healing and social justice.

Hip-hop meets bluegrass. At first, it doesn’t seem to be a viable combination but Gangstagrass has made it work. From their fan-favorite run on Season 16 of “America’s Got Talent,” to “Long Hard Times to Come” becoming the theme for “Justified,” the group has earned a devoted following for their genre-defying sound. Featuring Philly’s own R-SON the Voice of Reason, Gangstagrass hits City Winery in support of its latest album “No Time for Enemies,”.  The group’s upcoming holiday release “Sugarplums & Whisky” is due Dec. 16.

Philly’s own Snacktime dominated the festival circuit this year, so it makes sense that they are now finally headlining their own show at the TLA. Formed during the pandemic, the jazz/R&B/hip-hop band is now one of the most popular groups in the Delaware Valley. Their first full album release, “Sounds from the Street: Live!” is out now.

Lift Every Voice: A Tribute to James Weldon Johnson

Activists James Weldon Johnson was central to the Harlem Renaissance. The multitalented author, poet, lawyer is also the composer behind what many considered to be the ‘Black national anthem’, “Lift Every Voice and Sing”. Johnson was instrumental in anti-lynching and civil rights efforts for the NAACP, where he went from field secretary to executive secretary during his decade there. This weekend, the Christina Cultural Arts Center’s Literary Cafe hosts “Lift Every Voice: James Weldon Johnson” which remembers his life and legacy in song and performance.

Tower of Power has been grinding since 1968. Emilio Castillo and Stephen “Doc” Kupka co-founded the band in Oakland, California, likely never expecting they’d see this kind of longevity. Tower of Power has influenced artists from Prince, who included them on his inspiration mural at Paisley Park, to hip hop stars like Arrested Development and De La Soul. The band’s legendary horn section has collaborated with most of music’s elite. Their New Jersey stop is part of a national fall tour that ends this weekend in support of their latest release, 2020’s “Step Up.”

‘Things to Do’ this holiday: Longwood’s latest, Philly Balloon, Music Fest, and more

The weekend’s events include 4th of July celebrations all around the Philly area, the Parkway concert, Philly Balloon and Music Fest, and Pops on the Mall.

Easter and Passover are celebrated in the Delaware Valley, Kristen Chenoweth and Amos Lee are performing around the city.